Simona Halep became the first player in the top half of the draw to reach the quarterfinals after a straight set win over Carla Suárez Navarro. 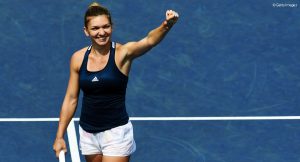 NEW YORK, NY, USA – Simona Halep became the first player in the top half of the draw to reach the US Open quarterfinals after a straight set win over Carla Suárez Navarro.

Some late service jitters turned a stroll across the line into an altogether tenser conclusion, but Halep recomposed herself to close out a 6-2, 7-5 victory.

The Romanian signaled her positive intent from the off, some sparkling attacking tennis helping her to a 4-0 lead. While Suárez Navarro eventually managed to get on the board it was far too late to rescue the set.

This pattern continued into the second. Halep, despite a slight dip, continuing to control much of the action and building a 5-2 lead. Yet with the end in sight, Suárez Navarro finally loosened up, displaying some terrific shotmaking to draw level.

Fuelled by her opponent’s brilliance, Halep unleashed a couple of winners of her own to break once more. Serving for the match a second time she did not waver, recovering from 0-30 to set up a quarterfinal showdown with either Yaroslava Shvedova or top seed Serena Williams.

We're not around right now. But you can send us an email and we'll get back to you, asap.